“Where are we going?” I asked my Norwegian friend, as we rode the T-bane in a direction I’d never been before. “Oh, it’s this weird statue park. I think you’ll like it. The most famous one is a naked man being attacked by four babies.” I wish I could say that I was indignant that someone had thought that’s the kind of sculpture I was in to. However, my reply was a much less demure “DO YOU MEAN ‘FUCK OFF BABIES IT’S DANCING TIME?!?'” My friend looked back at me with confusion. Apparently, he didn’t know that his precious sculpture had become one of the earliest memes. 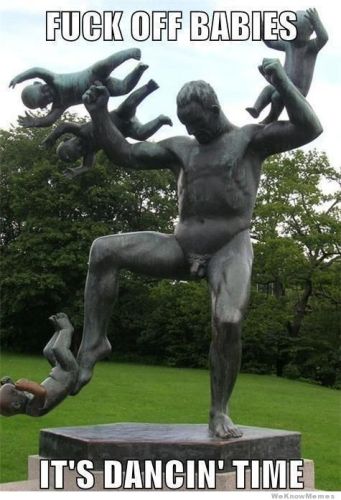 Frogner Park (Frognerparken to the locals) is home to the Vigeland Sculpture arrangement. The park holds 212 bronze and granite sculptures, and holds the record for the largest sculpture garden created by a single artist, Gustav Vigeland. The story I heard was that the local council wanted to demolish Vigeland’s house to build a library. After much negotiation, it was agreed that alternate accommodation would be provided for him, as long as he donated all subsequent work to the City of Oslo, which is how the sculpture park came to be.

My friend was right on two counts. It was weird. And I did like it. While the title of “most famous” is arguable, the most impressive part of the park is definitely the Monolith. It is a 14m high tower, made of 121 human figures from various stages of life. 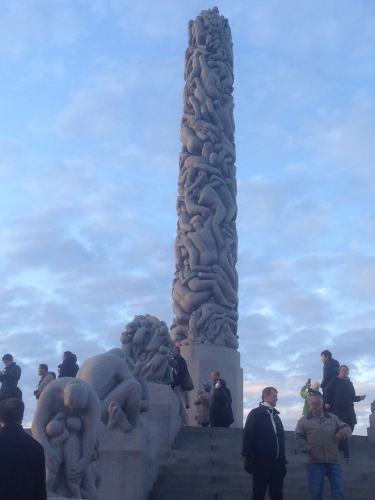 When you type “Frogner Park” into Google, one of the suggestions it supplies is “Frogner Park baby fighter”. The statue came in at number 14 on cracked.com’s “The 14 Most Unintentionally Terrifying Statues in the World” (in case you’re wondering, I’ve been to 7 of them). However, in my opinion, it’s not the weirdest thing you can see in Frogner Park.

Where is Frogner Park and how do I get there?

You can find Frogner Park at 62-64 Madserud Alle, Oslo 0266. We took the T-Bane west to Majorstuen and walked from there.

Do you have any other “unintentionally terrifying” sculptures I should visit? Because in case you haven’t gathered, I would be well into that. 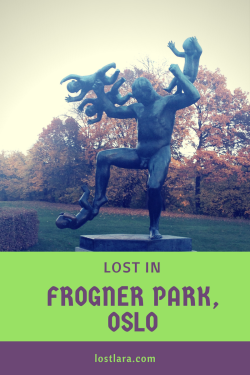