Generic disclaimer: I am in no way celebrating the history of leftist movements, socialism, or communism. This is intended to be an informative tool for open-minded and conscientious travellers looking to explore something different. I feel it is important to recognise the effect the left has had on shaping society and the political landscape. And, as such, there is room and hopefully, need for such articles.

In the 1930s, mosaics became a key element of the Moscow metro system and soon after they became a symbol of Soviet art. You can check out some beautiful photographs of Stalin’s metro stations here.  The following is a photo guide to all the mosaics I have found in Dnipro. This beauty takes up an entire wall and is in excellent condition. It seems wasted on the all-but-abandoned train station. Make sure you check the address – this is NOT in the main station where the intercity trains run.

I love the ones with an aeronautical theme (Cold War anyone?). It’s made even more apt, as Dnipro was nicknamed ‘Rocket City’ during this time. Add a strong, Soviet man brandishing a hammer and sickle. What more could you want?

In the communal playground at the back of some apartment blocks, this mosaic is titled “Youth – the Communism Builders”. Not in the best shape, and as you can see, when I was there it had been drawn on with sidewalk chalk. Don’t miss the rocket on the right-hand side. Note: 110 is Terra Shopping centre, this mosaic is right near apartment building 110a.

There was a big fence separating me from these mosaics, so the photos aren’t the greatest. The security guard also came out of his cupboard to yell at me a bit.  The university takes up the entire block, these are able to be seen from Yuliusha Slovatskoho St. 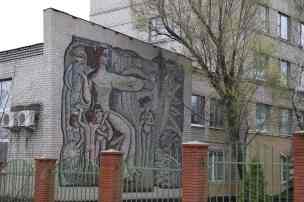 Again, I was separated from the mosaic by a fence, but again, as you can see, it is still very visible from the street. I was there on a Sunday – you may be able to get closer during the working week.

Just around the corner from Devyatin Hospital. Still in reasonable condition, however, the colours and intricacy of the mosaic suggest it would have been even more of a sight to behold in its glory days. Just outside Slavutych Stadium, virtually impossible to miss from the main road. Inside the walls of the stadium, there is some very nice graffiti/street art. 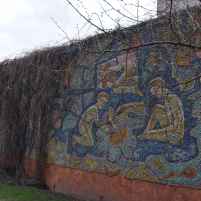 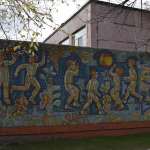 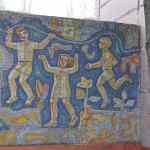 Rockets. Bright colours. The indoctrination of children. It’s everything I’ve ever loved. There was a fence with padlocked gates all around this school on the Saturday that I was there – except for one which was wide open. I walked through fully prepared to play the dumb tourist card if anyone stopped me, which they didn’t. Even if the gates were all locked, you can get quite a reasonable view of the whole thing from outside the school’s limits.

I made the mistake of taking a taxi to try to get here – do yourself a favour and take the metro to Pokrovs’ka (Покровська). A token will cost you 2 UAH and it’s a short walk from there to School 377. 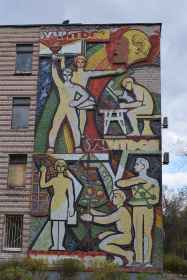 Is that giant blonde Lenin?
While not in the best condition, these pieces are truly breathtaking if you’re into overt displays of Soviet nationalism. No fence around School 37. 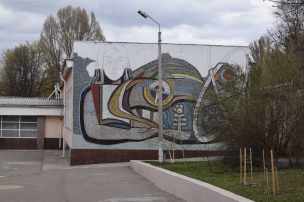 I only visited this one because it was within walking distance of some of the others on this page. From the outline of the lady’s face, I don’t think this piece was ever finished. There is a fence, but as with Nursery 377, the gate was open and you could see it from the street anyway. 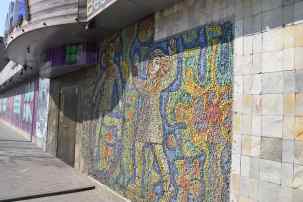 Sorry about the incredibly shit photos. The sun was in a really awkward position and made it hard to catch the detail and colours. These two are in reasonable condition. Some pieces have fallen out and in general, they are quite dirty. 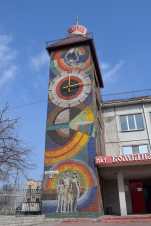 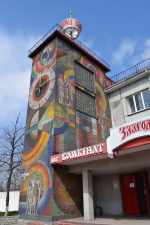 Wholesome, Soviet style. It’s high up (above the building), so hard to tell the condition of the mosaic. Shame about the drab colours. 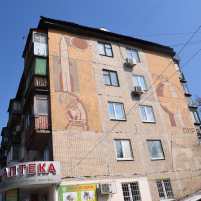 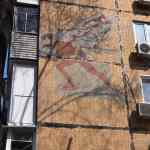 Slobozhanskyi Avenue 54 and 56 are identical, Soviet apartment buildings separated by a small driveway. On the sides of both buildings are these mosaics. While they are not the most colourful or in the best condition, they are a good example of Soviet propaganda, An easy walk from Palace of Culture, Metalurgov.

Where are your favourite Soviet mosaics? Do you know of any in Dnipro that I’ve missed?

Planning a trip to Ukraine?

12 thoughts on “Soviet Mosaics in Dnipro”