Opened in 1932, the Palace of Ilyich has been abandoned for the past 17 years as Dnipro (like the rest of Ukraine) tries to distance itself from its Soviet past. If it were Berlin, this would have become a museum, but instead it continues to decay with no plans for restoration, or conversely, to be razed either.

I first heard of the Ilyich in December, when I was chatting to a Norwegian guy I was sat next to on the train to Kyiv. He only spoke of it briefly, but he said that his (Ukrainian) wife had taken him there, bribed the guards and inside they had been able to see the last statue of Lenin in Dnipro. The idea of bribing the guards was supported by the recent Atlas Obscura article.

I left my house with a backpack full of beers, a small amount of cash, and some Caramello Koalas (chocolate koalas can melt even the frostiest of security, surely?). Much to my disappointment, when I got there, there were no guards to be seen. I even knocked on the window of the office (the only window that still had glass intact). I spoke to some locals who, again, directed me to the office and warned me that “[the guards] are bandits!” and that this was “no place for girls!”. I knocked again anyway. Still no guards. 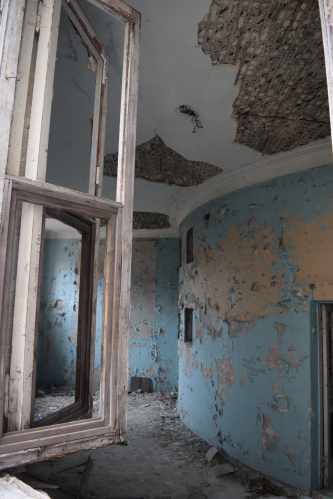 To spite them, I climbed in an open window. It was a bit of a drop down and I was afraid that I wouldn’t be able to get back out again. I couldn’t get very far as there was a heavy, wooden door blocking my path. I wasn’t afraid of security guards, but I was worried that I would disturb a homeless person, or (more likely) not be able to get back out of the window. I gave up for the day, but I’ll be back.

5 thoughts on “Through the Window of Lenin’s Ilyich”